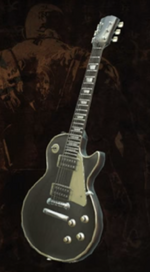 Description: The electric guitar is an instrument that uses a pickup to convert the vibration of its strange into electrical impulses with an amplifier. However, its output sounds are greatly affected by its shape and quality of it material. Therefore, top-level vintage products are sometimes traded at incredibly high prices.

Before heading to the elevator on the opposite side of the upper Cell Block C.

Alternately shaking them generates a brisk sound and rhythm, which can make even Ivan cheerful. 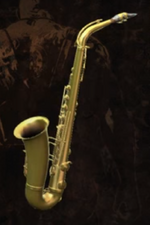 Description: The saxophone is a relatively modern instrument, invented in the 19th century by Belgian instrument maker Adolphe Sax. It combines the reverberating notes of a brass instrument with the mellower undertones of woodwind. It is widely used in various types of music, such as jazz and pop, as well as classical music - almighty like Ivan 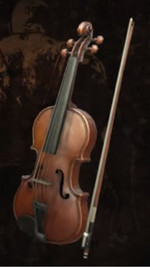 Description: The violin is a string instrument that acquired most of its modern characteristics in 16th-century Italy. Many of the violin created by the 17th-century Italian craftsman Antonio Stardivari are valued at over a million dollars. Violins are cornerstones in an orchestra, often taking the lead role.

Mission 4 - Remnants of the Tsardom 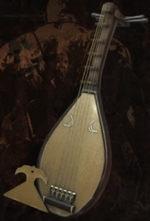 Description: A string instrument that made its way to Japan in the 7th century. The Biwa differs greatly from the modern Chinese Pipa in areas such as the number of frets and the manner of playing.

Different types of Biwa are used depending on the piece to be played. This "Heike Biwa" (Heike meaning "House of Taira") is used for "The Tale of Heike," the epic story of the rise and fall of the Taira clan. This song makes Ivan sad at heart. 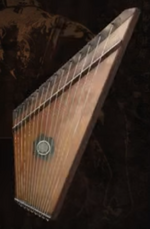 Description: The Gusli is a traditional Russian instrument once used by barbs and minstrels in their performances. It has distinctive, fanned-out strings, and it's played by plucking them while resting the instrument on both knees. The Gusli's sound is both strong and subtle, resonating deeply with Ivan. 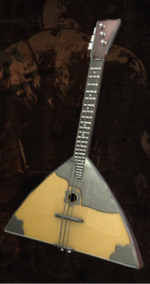 Description: The balalaika is a Russian folk instrument with a characteristic triangular body. It is said that the word "balalaika" is derived from the Russian word "balakat," which means "jabber." Modern balalaika are produced in various sizes. A contrabass balalaika is too big even for Ivan to ignore.

Description: The most widely known type of inexpensive harmonica, which is also called "Ten Hole." A small and simple instrument to be fit in the palm, though its sounds, generated with various techniques such as"trill," "bending," and "vibrato," are as nostalgic and heartfelt as Ivan.

Mission 8 - Under the Flags of Freedom Location: 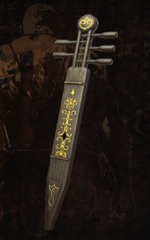 Description: The tonkori is a traditional plucked-string folk instrument played by the Ainu people in Sakhalin. Its mystic pentatonic sounds continue to fascinate Ivan. While five-string tonkori are the most common, they may have three or as many as six strings.

Retrieved from "https://devilsthird.fandom.com/wiki/Musical_Instruments?oldid=10173"
Community content is available under CC-BY-SA unless otherwise noted.